This it can be seen that much delay is taking place in implementation of the favourbale recommendations of the GDS Committee Report. Eventhough Secretary, Department of Posts has informed that Postal Board will take speedy action for implementation, many hurdles including Finance Ministry’s approval are to be crossed yet.

Posted by NFPE BARASAT at 10:42 No comments: 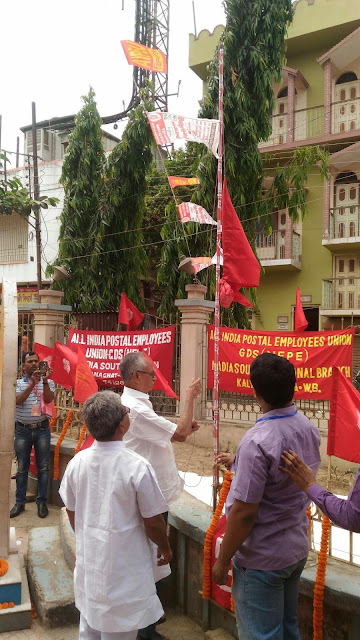 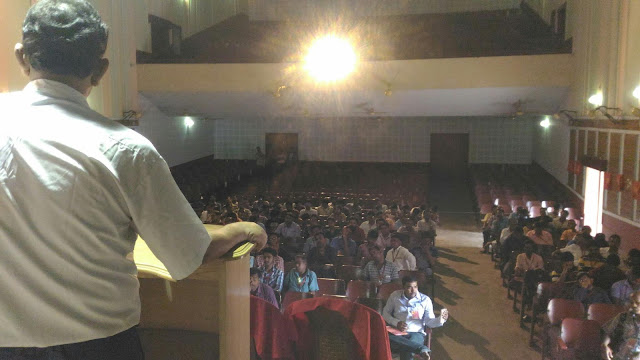 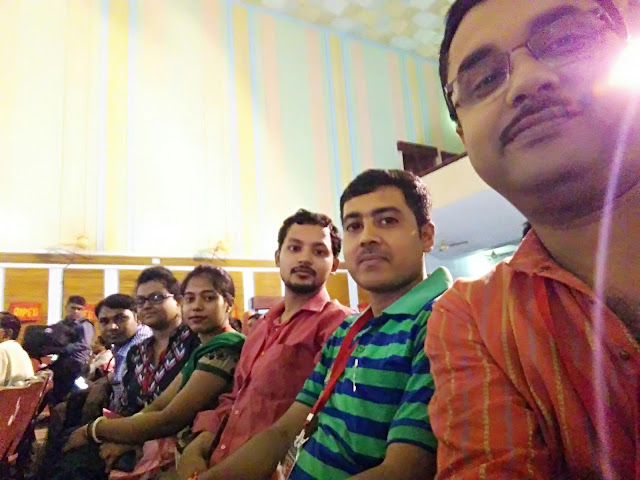 Posted by NFPE BARASAT at 14:03 No comments: 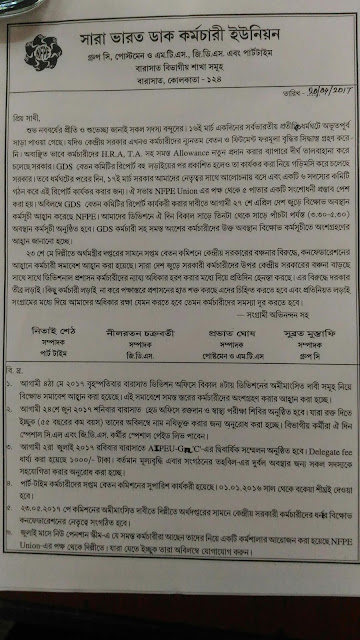 Posted by NFPE BARASAT at 12:36 No comments:

NATIONWIDE DEMONSTRATION AT ALL IMPORTANT CENTRES ON SAME DAY

MORE THAN 2000 CENTRAL GOVERNMENT EMPLOYEES AND PENSIONERS WILL PARTICIPATE IN THE PROTEST DHARNA.

Demanding Honouring of assurance given by Group of Ministers including Finance Minister, settle the charter of demands submitted by Confederation, increase minimum pay and fitment formula, payment of revised allowances including HRA w.e.f 01.01.2016, implementation of option – I pension parity recommended by 7th CPC, Scrap New Contributory Pension Scheme and bring all employees appointed after 01.01.2004 under the purview of CCS (Pension) Rules 1972, Grant Civil Servant Status and revise the wages and allowances of Gramin Dak Sevaks, regularise all casual and contract workers, Revise pension of autonomous body pensioners and grant dearness relief due from 01.07.2016, withdraw “Very good” bench mark condition for MACP etc.

All affiliated organisations and COCs are requested to mobilise maximum number of employees & pensioners in the above two programmes. Detailed circular will be issued shortly

About 1000 delegates participate. Details will be published shortly.

About 250 delegates will attend the camp.

Please note that the venue of the All India Trade Union Education Camp is shifted from EMS Academy to BTR Bhavan Mele Thampamoor, Thiruvananthapuram, which is in the heart of the city and walkable distance from Railway station and Bus stand. Contract numbers of Reception Committee is given below.

Number of delegates allotted to each affiliated organization.

All affiliated organisation and COCs are requested to ensure participation of allotted quota of delegates without fail. The camp will start at 10:00 AM on 6th May and continue upto 5:00 PM on 7th May 2017. Accommodation and food will be arranged by the Reception Committee. Delegate fee Rs. 800/- (Rs. Eight Hundred only) per head.

Posted by NFPE BARASAT at 19:04 No comments:

Sub: -  Payment of arrears and revised wages from 01.01.2006 in respect of Postal Casual, Part time, contingent and daily-rated mazdoors.

1.      Your kind intervention is requested to redress the following genuine grievances of the most exploited and low-paid poor casual labourers of Postal Department. They are mostly unorganized and marginalized and hence your goodself alone can do justice to them.

2.      Department of Posts issued orders on 22.01.2015 (i.e.; two years back) for payment of revised wages to casual, Part-time, contingent and daily rated mazdoors working in the Postal department with effect from 01.01.2006, consequent on revision of minimum pay of Central Govt. employees by the Govt. as per the recommendations of 6thCPC.

“the spirit of this Directorate’s OM dated 22.01.2015 is to allow revised remuneration to such full time-part time casual labourers, who have physically worked or who continue to work as such in that capacity, with no ambiguity whatsoever.”

The above two clarificatory orders issued by Directorate set at rest all the doubts regarding payment of revised wages to Casual labourers w.e.f 01.01.2006.

5.      But, we regret to inform you that, evenafter a lapse of two years the above orders are not yet implemented in many circles and divisions and eligible revised wages and arrers are not yet paid to the poor casual labouerers.

(2) West Bengal Circle – the order is not yet implemented in the case of casual labourers and daily rated mazdoors working in the divisions of Kolkata Metropolitian city and some other divisions.

Our representatives have discussed the case with the Circle/Regional Authorities several times but the administration is totally negative and adamant.

6.      In majority of the Circles and Divisions eventhough the revised wages are implemented, arrears for the period from 01.01.2006 is still pending. When contacted the reason stated is that funds are not revived from Directorate, eventhough Circle offices has submitted requisition for required funds to make payment of arrears.

7.      Further Directorate has already issued orders, again revising the wages of casual labourers with effect from 01.01.2016, consequent on revision of minimum pay of Central Govt. employees by the Govt. as per the recommendations of 7th CPC. The above orders is yet to be implemented in all Circles.

8.      In view of the above stated facts, it is once again requested that immediate action may be taken by the Directorate to

Without strict and time bound orders from Directorate, there is no chance for improvement in the present situation and the poor casual labourers will continue to be subjected to untold miseries.

Posted by NFPE BARASAT at 17:16 No comments: 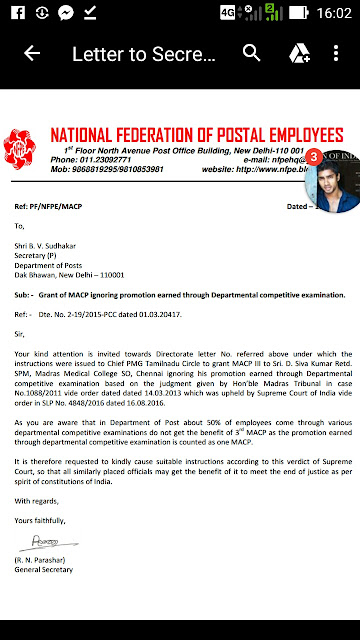 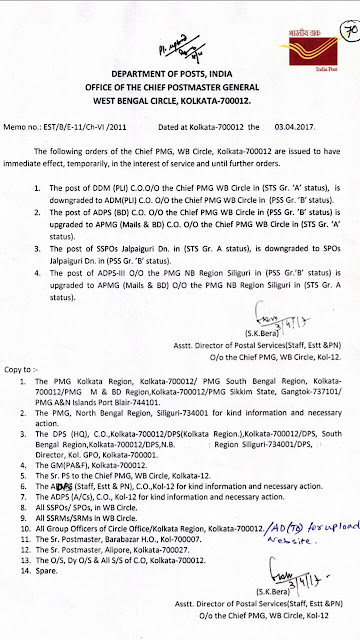 After having failed in CAT, Madras High court and Supreme Court, the Government finally ordered to implement the judgement in favour of Sri D.Sivakumar, Retd SPM, MMC PO, Chennai city north division who moved the court pleading that promotion through competitive examination should not be counted as MACP.

The order of CAT accepting his prayer was challenged by the Government in Madras High court and subsequently in Supreme Court. Its attempt to deny the justice was defeated by the Judiciary.

On the direction of the Directorate, the SSPOs, Chennai City north division has now issued order granting MACP lll from 1.9.2008 to the official.

A great victory indeed after prolonged legal battle. He may be the first to put an end to the deliberate injustice of the Government.

Now from now on, we must try to extend the benefit to all the victims of injustice in MACP case.

Posted by NFPE BARASAT at 10:52 No comments:

Posted by NFPE BARASAT at 10:33 No comments: