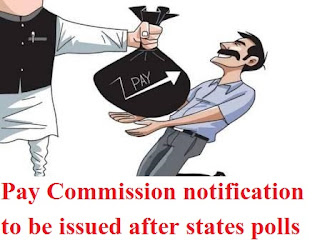 New Delhi: The notification to put into effect the Seventh pay commission recommendation will be issued after the completion of states assemblies’ poll process as the model code of conduct is currently in place, sources of Finance Ministry said on Wednesday.

The assemblies’ election of Tamil Nadu, West Bengal, Assam, Kerala and Puducherry states, which will be held from April 4 to May 16 and the counting of votes in the states will take place on May 19 but the model code of conduct will remain in place till May 21.

So, it is believed that the government will announce Seventh pay commission award after the end of model code of conduct of states assemblies election.

The government doesn’t want to give any chance to the Opposition to deter its image in the polls and hence, sources, said that the announcement of the dates of the the model code of conduct of states polls seems to be the cut-off point for notification of the Seventh pay commission award.

“The BJP led central government decided execution time of the pay commission’s proposals in April but the Empowered Committee of Secretaries headed by cabinet Secretary can’t sort out some anomalies of Seventh pay commission recommendations like scrapping of advances, allowances and minimum pay before declaration of states Assemblies polls,” sources said.

Sources also said the Implementation cell of the Empowered Committee of Secretaries for the Seventh pay commission recommendation in Finance Ministry works hard to send a summary of the pay commission implementation to PMO for its nod. After PMO’s nod, it would be placed before the cabinet for its nod through cabinet secretary.

The Seventh Pay Commission was set up by the UPA government in February 2014, The Commission headed by Justice A K Mathur submitted its 900-page final report to Finance Minister Arun Jaitley on February 19, recommending 23.55 per cent hike in salaries and allowances of Central government employees and pensioners.

The panel recommended a 14.27 per cent increase in basic pay, the lowest in 70 years. The previous 6th Pay Commission had recommended a 20 per cent hike, which the government doubled while implementing it in 2008.

The Seventh pay commission recommended fixing the highest basic salary at Rs 250,000 and the lowest at Rs 18,000and its increased the pay gap between the minimum and maximum from existing 1:12 to 1: 13.8

The government constitutes the Pay Commission almost every 10 years to revise the pay scale of its employees and pensioners, often these are adopted by states after some modifications. However, the Seventh Pay Commission suggested to discontinue the practice of appointing pay commissions in future.
Read at The Sen Times (TST)
Posted by NFPE BARASAT at 12:34 No comments:


As much as Rs 70,000 crore has been provisioned in the Union Budget 2016-17 for implementation of Seventh Pay Commission for government employees, a top finance ministry official said.

While the Budget did not provide an explicit overall provision number, the government had said the 7th Pay Commission hike has been built in as interim allocation for different ministries and Budget numbers were credible. Implementation of the pay commission report in toto is to cost the government Rs 1.02 lakh crore.

Posted by NFPE BARASAT at 16:35 No comments: 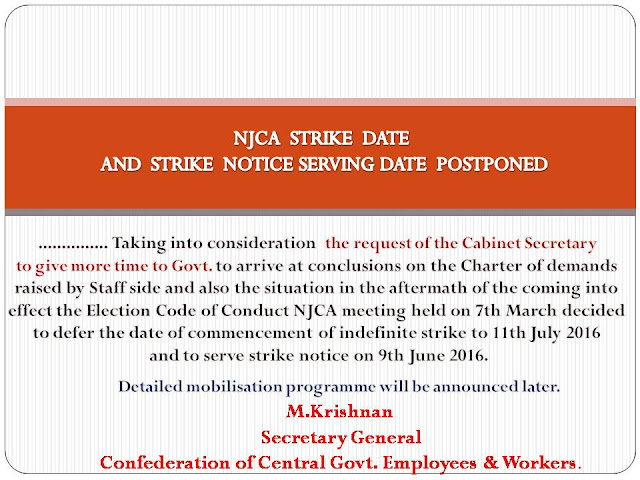 Posted by NFPE BARASAT at 16:32 No comments:

New Delhi, Mar 8 (PTI) In the face of all round attack, Finance Minister Arun Jaitley today completely rolled back the controversial proposal to tax the employees' provident fund (EPF) at the time of withdrawal.

Taking the first opportunity available, he made a suo motu statement in the Lok Sabha in which he also announced withdrawal of imposing monetary limit for contribution of employers to provident and superannuation fund of Rs 1.5 lakh for taking tax benefit.

Jaitley, however, left untouched the proposal tax exempt 40 per cent of National Pension Scheme and services provided by EPFO to employees.

"In view of the representations received, the government would like to do comprehensive review of this proposal and therefore I withdraw the proposals in para 138 and 139 on my budget speech. The proposal of 40 per cent exemption given to NPS subscribers at the time of withdrawal remains," the Minister said.

Click here for full details
Posted by NFPE BARASAT at 16:28 No comments: