In one of such cases, Government has agreed to implement the judgement of the CAT within one month for grant of full Pension to Pre 2006 Pensioners who retired after 10 years of service on superannuation or 20 years of service on Voluntary retirement or absorption in PSU. This commitment was given by the Government Advocate in CAT PB New Delhi during the hearing of the Contempt of Court Case filed by Shri Pratap Narayan & others -vs – Union of India.

Source : http://www.gconnect.in/orders-in-brief/pension/full-pension-for-pre-2006-pensioners-2.htm
Posted by NFPE BARASAT at 15:05 No comments:

Posted by NFPE BARASAT at 16:57 No comments:

Interest Rates of Small Saving Schemes to be recalibrated w.e.f. 1.4.2016 on a Quarterly Basis

Interest Rates of Small Saving Schemes to be recalibrated w.e.f. 1.4.2016 on a Quarterly Basis to align the small saving interest rates with the market rates of the relevant Government securities;
Interest rate on savings schemes based on laudable Social Development or Social Security Goals including Sukanya Samriddhi Yojana, the Senior Citizen Savings Scheme and the Monthly Income Scheme left untouched by the Government.

The National Savings Schemes (NSSs) regulated by the Ministry of Finance offer complete security of investment combined with high attractive returns. These schemes also act as instruments of financial inclusion especially in the geographically inaccessible areas due to their implementation primarily through the Post Offices, which have reach far and wide.

The small savings interest rates are perceived to limit the banking sector’s ability to lower deposit rates in response to the monetary policy of the Reserve Bank of India.  In the context of easing the transmission of the lower interest rates in the economy, the Government also has to take a comprehensive view on the social goals of certain National Small Savings Schemes.  Accordingly, it has been decided that the following shall be implemented with effect from 1.4.2016 with regard to National Savings Schemes:

1.  The Sukanya Samriddhi Yojana, the Senior Citizen Savings Scheme and the Monthly Income Scheme are savings schemes based on laudable social development or social security goals.  Hence, the interest rate and spread that these schemes enjoy over the G-sec rate of comparable maturity viz., of 75 bps, 100 bps and 25 bps respectively have been left untouched by the Government.

2.  Similarly the spread of 25 bps that long term instruments, such as the 5 yr Term Deposit, 5 year National Saving Certificates and Public Provident Fund (PPF) currently enjoy over G-Sec of comparable maturity, have been left untouched as these schemes are particularly relevant to the self-employed professional and salaried classes.  This will encourage long term savings.

3.  The 25 bps spread that 1 yr., 2yr. and 3 yr. term deposits, KVPs and 5 yr Recurring Deposits have over comparable tenure Government securities, shall stand removed w.e.f. April 1, 2016 to make them closer in interest rates to the similar instruments of the banking sector.  This is expected to help the economy move to a lower overall interest rate regime eventually and thereby help all, particularly low-income and salaried classes.

6.        Premature closure of PPF accounts shall be permitted in genuine cases, such as cases of serious ailment, higher education of children etc,. This shall be permitted with a penalty of 1% reduction in interest payable on the whole deposit and only for the accounts having completed five years from the date of opening.

7.  In pursuance to the decision as mentioned in Para 4 above, the rates of interest applicable on various small savings schemes for the quarter from April to June 2016 effective from 1.4.2016 would be notified in March, 2016.

The above changes have been brought with the objective of making the operation of National Saving Schemes market-oriented in the interest of overall economic growth of the country, even while protecting their social objectives and promoting long term savings.
Posted by NFPE BARASAT at 17:17 No comments:

Revision of incentive of CPI work 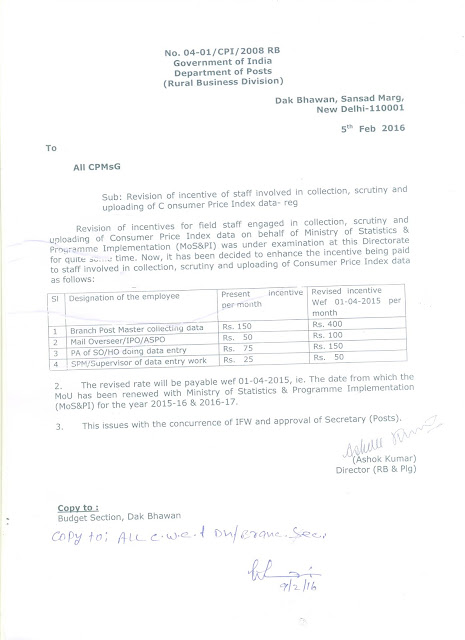 Posted by NFPE BARASAT at 15:05 No comments:

Interest Rates for Small Savings Schemes, may be reduced by the Government

Interest rates on small savings schemes, except the ones for the girl child and senior citizens, could be reduced by 25 to 50 basis points (bps) with effect from April 1.

Interest rates on small savings schemes, except the ones for the girl child and senior citizens, could be reduced by 25 to 50 basis points (bps) with effect from April 1. Henceforth, the interest rate would also be reset on a quarterly basis instead of annual basis. An official announcement in this regard is expected in a day or two.
Without mentioning how much the reduction would be in the interest rates, economic affairs secretary Shaktikanta Das on Thursday said the spread of 25 bps (above the average yield from government securities with similar maturity) available now for the small saving schemes below five years, would be reduced. “But for long term saving schemes of above five years, the spread will be protected because the government has taken into consideration the interest of the small savers and the need to encourage long term savings,” Das said. Even if the spread is maintained for long-term savings, the actual interest rate on these could come down a bit as yields on government securities have declined over the past year, analysts say.
Though small savings rate are usually determined to be 25 basis points above the average yield from government securities with similar maturity in the previous year, there have been three instruments that carry even higher rates: Sukanya Samriddhi Account, the Senior Citizens Savings Scheme and the National Small Saving Certificates (NSC). While the proposed changes won’t impact the high interest bearing schemes for the girl child and senior citizens, there could be some reduction in the NSC rates also.
Once these rates are announced, it is expected that bank deposit and lending rates to also fall. While the Reserve Bank of India has been cutting rates, banks have passed on less than half of the cuts on account of high rates on small savings schemes. Bankers say if they cut rates, much of their deposits would flow into small savings schemes.
For example, one-year postal deposit offers 8.4% where as State Bank of India offers 7.25% for deposits of the same tenure (7.5% for senior citizens). For the girl child’s welfare, the Sukanya Samriddhi Account Scheme offers 9.2% interest for a period up to 10 years while SBI offers only 7% on term deposits of 5-10 years (7.25% for senior citizens).
The cumulative corpus of National Small Savings Fund is projected to rise to Rs 9.59 lakh cr after accretion of Rs 52,000 cr in 2015-16.
Posted by NFPE BARASAT at 14:58 No comments:

Norms of business hours in Post Offices - should not be violated by the Postal authority. 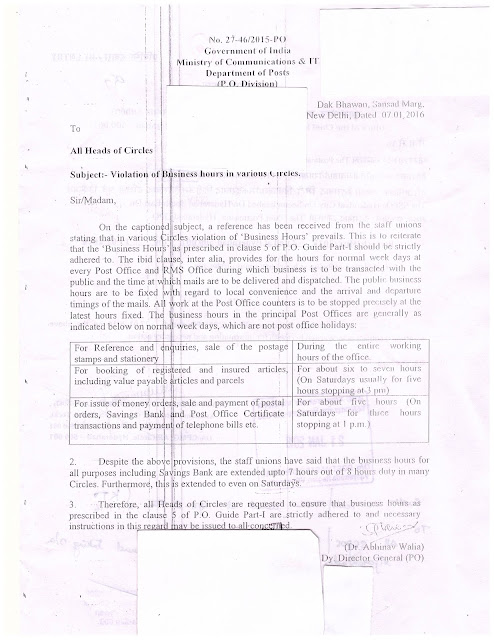 Posted by NFPE BARASAT at 17:51 No comments:

The Seventh Pay Commission headed justice A K Mathur has correctly predicted the dearness allowance (DA) hike to 125 per cent from the existing 119 per cent since January 2016.

The much awaited All India Consumer Price Index (Industrial Workers) for the month of December 2015 has been released by Govt. It has decreased by one point from 269 from 270 which was recorded in the month of November 2015.

This confirms that DA from January 2016 will be 125% which was estimated by 7th Pay Commission.

Consequently, no correction or change in 7th pay commissionfitment formula / multiplication factor of 2.57, will be needed now with respect to DA factor is concerned.

Posted by NFPE BARASAT at 17:16 No comments: