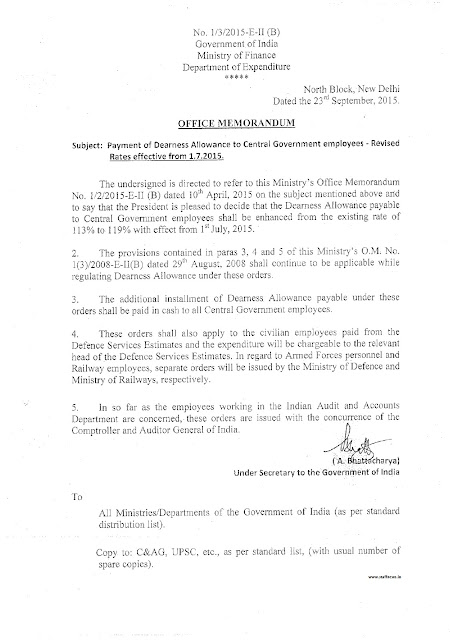 Posted by NFPE BARASAT at 18:10 No comments: 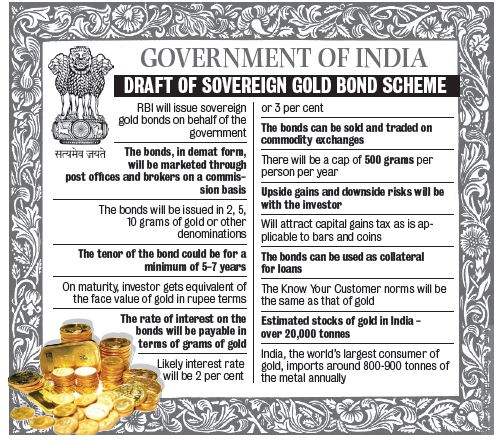 Attention of all concerned is invited to this Directorate’s letter No. 17-39/7/2012-GDS dated 14th Jan 2015 vide which detailed selection process to the GDS Posts was introduced based on Aptitude Test to be conducted at Circle level through outsourced agency and selection to the GDS Posts was prescribed to be made based on marks secured in the Aptitude Test in respect of vacancies notified on or after 01.04.2015. Subsequent thereto, it was also laid down vide this Directorate’s letter No. 17-39/7/2012-GDS dated 28th May 2015 that in case vacancies notified on or before 31.03.2015 do not get filled up by 30.06.2015, the notification will be cancelled and vacancies be filled up under the new engagement process (Aptitude Test Method) effective from 01.04.2015.
2. In View of the pronouncement of the Hon’ble Prime Minister in his address to the Nation delivered on 15th Aug 2015 to make selection to the junior level posts based on marks appearing in the marks sheet without an element of interview through transparent online process, the selection process introduced vide this Directorate’s letter ibid has been reviewed by the authority competent to align the selection process/criteria with the pronouncement made by the Hon’ble Prime Minister taking note of the fact that GDS posts are lower level civil posts outside the regular civil service not falling under Group A, B & C posts by replacing the process introduced vide this Directorate’s letter No. 17-39/7/2012-GDS dated 14th Jan 2015, pending introduction of online process in due course, in the manner indicated below:-
(a) There will be no change in the eligibility criteria laid down in this Directorate’s letter No. 17-39/6/2012-GDS dated 14.01.2015 & strict observance of the same will be ensured by all recruiting authorities concerned while issuing notification.


(b) The recruiting authorities will be guided by the below mentioned method of engagement to all approved categories of GDS Posts:-

(i) In case a vacancy does not get filled up through other regular modes of engagement viz.; by combination of duties or by absorption of surplus GDS or by compassionate engagement or by transfer under limited transfer facility, vacancy will be notified first to casual labourers within the jurisdiction of the recruiting authority as per existing instructions contained in this Directorate’s letter No. 17-3 9/4/2012-GDS dated 14.01.2015 read with clarification issued under No. 17-15/2015-GDS dated 07.05.2015.

(ii) In case vacancy does not get filled up through process outlined at (i) above, the recruiting authority before taking decision to fill up the post by way of open notification is to examine the representation of the reserved communities and then decide to which community the vacancy is to be earmarked or the vacancy would go to other community based on order of shortfall subject to overall restriction of 50% in a calendar year strictly as per this Directorate letter no. 19-11/97-ED& TRG dated 27.11.1997. As regards, differently abled persons are concerned, instructions contained in this Directorate letter no. 21-8/92-ED&TRG dated 22.04.1994 shall have the application.

(iii) The vacancy will then be notified to Employment Exchange requesting nomination of suitable candidates [not less than 3] for the post within a period of 30 days from the date of sending requisition to the concerned authority having the prescribed qualification. Simultaneously [on the same day of notification of vacancy to Employment. Exchange], the vacancy will be given wide publicity by displaying a notice giving particulars of the engagement to be made, remuneration and other conditions attached to it at the concerned post office, the police station, the Panchayat office and any other public place considered suitable allowing the same time of 30 days for receipt of applications. A copy of the notification will also be circulated to all Post Offices within the Division duly entered in Account Bag for display on Notice Board. In case the last date falls on Sunday/Holidays, the cut of date will be reckoned as close of subsequent working day.

(iv) The candidates nominated by employment exchange (if any) will then be addressed by service registered post enclosing a copy of the application for the post with a covering letter containing instructions to fill-up the same and self attested documents to be enclosed for further submission to the recruiting authority concerned within 30 days mentioning the cutoff date up to which the application duly completed is to be received by recruiting authority by Registered / Speed Post. Here also, In case the last date falls on Sunday/Holidays, the cut of date will be reckoned as close of subsequent working day.

(v) The candidates nominated by the Employment Exchange as also those responding to the open advertisement will be considered.

(vi) The recruiting authorities concerned will arrange /maintain a register for keeping a proper record of the application received from the candidates applying against open notification as also in response to communication sent by them following their nomination from Employment Exchange on a day to day basis. However, the closed covers will not be opened till the day earmarked for selection.

(viii) Selection will be made by the committee strictly based on marks secured only in Secondary School Examination pass certificate of 1oth standard conducted by any recognized Board of School Education in India and will be guided by the clarification issued under this Directorate’s letter No. 17-39/2012-GDS dated 08.01.2014. The committee will also prepare a select panel of 5 candidates for a post in accordance with directions contained in this Directorate’s letter No. 19-14/2010-GDS dated 25.06.2010 followed by letter dated 18.10.2013.

(ix) Result will be communicated to the candidate standing first in the list on the same day of selection through Registered post. Besides, a copy of the result will be displayed on the notice board of the recruiting authority on the day of finalization itself.

(x) Pre-engagement formalities will be got completed by the recruiting authority concerned in respect of the candidate standing at the top besides only verification of the documents in respect of other four remaining candidates finding place in the select panel.

3. Wherever notification has been issued adopting the new method of selection made effective from 01.04.2015, the same will be cancelled and the concerned recruiting authorities will be directed to initiate action to fill up the post taking recourse to the process outlined above. Besides this, where vacancies have been notified on or before 31.03.2015, action will be taken by the respective recruiting authorities by completing the process already undertaken.

4. The contents of this letter may be disseminated to all concerned for strict adherence.

Special allowance are not included here
Posted by NFPE BARASAT at 00:35 No comments:

To tone up the bureaucratic apparatus and weed out officials of doubtful integrity and efficiency, the government has asked all its departments to identify such public servants and move proposals for their premature retirement.

The move by the Department of Personnel and Training follows a meeting chaired by Cabinet Secretary P K Sinha recently on mechanisms to be adopted to ensure probity among government servants.

The departments have been asked to invoke provisions of Fundamental Rule (56J) to compulsorily retire such officials.

Under Fundamental Rule 56(J), the government has the "absolute right" to retire, if necessary in public interest, any Group A and B employee, who has joined service before the age of 35 and has crossed the age of 50.

Under the rules, a C Group government servant, who has crossed the age of 55 can be retired prematurely but action can be taken only if the official is suspected to be corrupt or ineffective.

Group A comprise officers of All India Services like IAS, IPS, Indian Forest Service, IRS, while Group B consists of non-gazetted officers and Group C clerical and ministerial staff.

However, action can be taken only against such officers whose annual increment have stood frozen for a few years and have not got promotion in preceding five years.

The meeting emphasised rotation of officers on sensitive and non-sensitive posts and their review and screening under FR 56(J).

The DoPT has been asked to monitor implementation and obtain compliance from all ministries in this regard.

"As this activity is to be completed in a time bound manner, it is requested that priority attention may be paid to it and inputs sent to the internal vigilance section at the very earliest," the notice, sent to all ministries, said.
Source : The Economic Times
Posted by NFPE BARASAT at 10:44 No comments:

REVIEW OF THE ORDERS OF ‘HOLDING IN ABEYANCE OF APPOINTMENT/TRAINING’ PERTAINING TO PA/SA EXAM 2014 –REGARDING.- A great achievement of NFPE 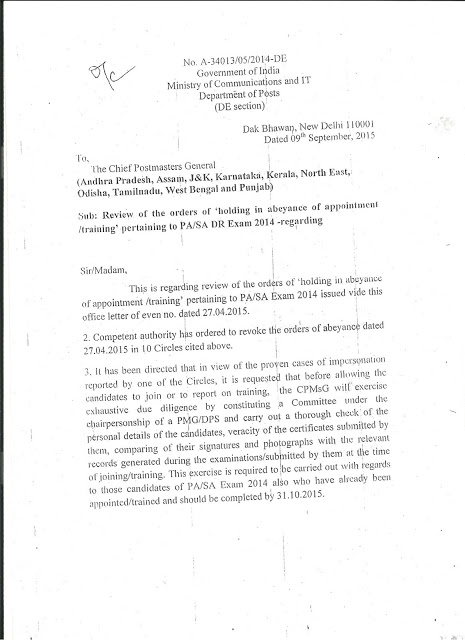 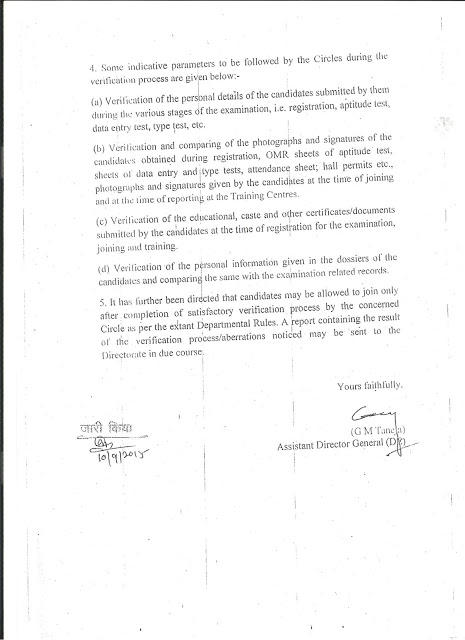 BAN ORDER ON PA/SA RECRUITMENT OF 2014-15 HAS BEEN WITHDRAWN BY THE POSTAL DIRECTORATE ON PRESSURE OF NFPE IN R.O WEST BENGAL AND OTHER CIRCLEs EXCEPT 5 CIRCLES . IT HAS COME TO OUR NOTICE BY THE RELIABLE SOURCES .

IT HAS COME TO OUR NOTICE THAT BAN ORDER ON RECRUITMENT OF PA/SA CANDIDATES OF 2014-15 IS BEING WITHDRAWN BY THE POSTAL DIRECTORATE BY CONTINUOUS PRESSURE OF NFPE. THIS WILL BE EFFECTED WEST BENGAL AND OTHER CIRCLES EXCEPT 5 CIRCLES.
Posted by NFPE BARASAT at 15:48 No comments:

Good news for central government employees. The Union Cabinet on Wednesday cleared a proposal to increase dearness allowance (DA) to 119% from 113%, which will potentially benefit over one crore government employees and pensioners.
Posted by NFPE BARASAT at 15:08 No comments:

RED SALUTE TO ALL COMRADES OF BARASAT POSTAL DIVISION WHO PARTICIPATED HISTORIC NATION WIDE GENERAL STRIKE ON 02-09-15 CALLED BY ALL TRADE UNIONS AND OUR CONFEDERATION. MAXIMUM NO OF POST OFFICES UNDER BARASAT DIVISION WERE CLOSED YESTERDAY. 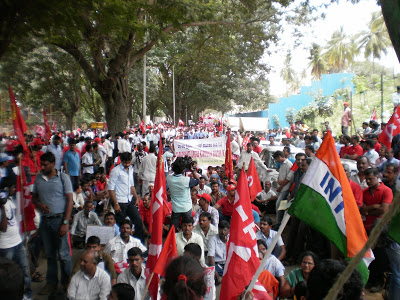 Posted by NFPE BARASAT at 14:43 No comments: