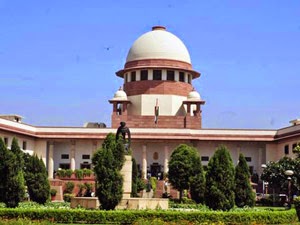 A government employee can't be kept suspended for more than three months if not formally informed about the charges, the Supreme Court said Monday.

Based on the principle of human dignity and the right to speedy trial, the landmark verdict is expected to affect lakhs of government employees across India, many of whom are under suspension for years pending departmental proceedings.

"Suspension, specially preceding the formulation of charges, is essentially transitory or temporary in nature, and must perforce be of short duration," a bench headed by justice Vikramjit Sen said.

If the charge sheet or memorandum of charges was served within three month, the suspension could be extended, it ruled.

"If it (suspension) is for an indeterminate period or if its renewal is not based on sound reasoning…, this would render it punitive in nature," the court said.

It agreed with petitioner's senior counsel Nidhesh Gupta that a suspension order can't continue for an unreasonably long period.

Protracted periods of suspension had become the norm and not the exception that they ought to be, the court said. It drew a parallel with criminal investigation wherein a person accused of heinous crime is released from jail after the expiry of 90 days if police fail to file the charge sheet.

The suspended persons suffers even before being charged and "his torment is his knowledge that if and when charged, it will inexorably take an inordinate time for the inquisition or inquiry to come to its culmination". "Much too often this has now become an accompaniment to retirement," the court said, setting aside a direction of the central vigilance commission that required departmental proceedings to be kept in abeyance pending a criminal investigation.

The government, however, was free to transfer the officer concerned to any department in any of its offices to ensure the employee did not misuse contacts for obstructing the probe, the court said.

The order came on a petition filed by defence estate officer Ajay Kumar Choudhary, who was suspended in September 2011 for allegedly issuing wrong no-objection certificates for the use of a four-acre land parcel in Kashmir. After failing to get relief from the Delhi high court, Choudhary had moved the top court in 2013.

Since a charge sheet had already been served on Choudhary, these directions would not apply to his case, the court said.
Source : http://www.hindustantimes.com/india-news/supreme-court-sets-bar-on-suspension-of-govt-employees/article1-1317561.aspx
Posted by NFPE BARASAT at 17:17